It can be easy to forget what one has done in a year. Here’s my 2015 retrospective, and what I would like to do in 2016. My word, when I was wrapping up my time in Seattle and headed to Cambridge, was intent — I was good at doing what I could with what I had, but I wanted to be more intentional about where I wanted to end up. Having now oscillated quite far in that direction, the word I’ll be carrying with me in 2016 is humility. I want to return to listening to what others have to say, to seeking the gems and surprises and connections, rather than focusing on my own intentions. That said, intentionality sure did carry some pretty amazing things with it…

Invested in taking care of myself

With two dear friends in Cambridge, working out twice a week (ish) became joyful instead of a chore. I’m now stronger than I’ve been in a long while, and my body is eager to move regularly (and noticeably unhappy when I don’t). I also can even (sometimes) run 5k in under 30 minutes. I’m comfortable in my own body again, years after breaking my arm and losing access to that part of life.

In no small part due to an aggressively healthy work place (that in the next section), I have been taking been taking care of myself. I devised ways of being connected to others while still being mobile, and made that into a pattern for others to follow. This has also meant tracking my mood, how much I’m drinking (which way less, of both caffeine and alcohol, and way more of water), how well I’m sleeping, and starting to detect trends and linkages across everything. I started practicing meditation with any degree of regularity, and continue to feel the benefits. I also took a plethora of tiny vacations which, while including coworking, but were not for work. Being places Not For Work was bizarre and magical. All of these things combined to make this my least anxious year in a very, very long time.

While still by no means wealthy, I have started a retirement account (at 31 years old!) and paid off the small running loan I had with a family member (privilege jazz hands).

I tend to put myself into situations in which I cause myself anxiety. As an exercise in taking care of myself without extra stress while also spending time with friends, I attended Burning Man with False Profit… and didn’t tell anyone. It was great — I ran into old friends, made new friends, helped take care of camp, learned to fly a kite, and took it so easy that I only made it into the City once.
I’ve also started saying “no” more often in general. “No” to projects which aren’t strategic for myself and the project-holder, and to people who are unhealthy for me. I nearly took a job at the end of 2014 which would have been super unhappy even though it was with on amazing projects and with amazing people. Instead, with the help of a few friends, I disappointed those rad folk at that prospect by saying “no,” and instead I… While I am also super proud of being able to do the occasional thing from the command line now (and that I can get around just fine on my work Linux box), the main thing I’ve learned at Aspiration is how to slow the fuck down. While we’ve always shared an ideal of under promising and over delivering, Team Aspiration manages to do so while taking care of ourselves and others. It’s magical. It’s possible. Please do try it out in your own work/life balance. As Misty reminded me, people died so you could have a weekend. Maybe we should take them.

The amazing work on Disaster and Humanitarian work continues through work on subjective indicators of resilience in the Horn of Africa, with our first Humanitarian Technology Festival, with regular digital responder checkin calls, as expressed through a talk on digital and distributed disaster response at Berkman, and with creating games around infrastructure. I also invested heavily in the online harassment space through work on Weaponized Social and on the International Workshop on Misogyny and the Internet. Random, delightful bits included the Boston Civic Media Consortium, a design charette with Global Witness, and visualizing the Media Democracy Fund gatherings. I also got to help with our Nonprofit Dev Summit, general workings, and a handful of delightful offsite gatherings.

I also looked at some of the relationships in my life, came to some understandings on which were unhealthy and which were based on unmatched expectations. While difficult, reaching shared footing with other parties has overall benefitted the rest of life. That also means I’ve opened up cognitive and emotional bandwidth to start considering what having a primary partner (and being a primary to someone) would look like.

After rabidly following Santa Perpetua‘s work across the internet for a couple years, I finally worked up the gumption to ask her to work on me. We spent 7 hours doing my left leg in August (which has now apparently appeared in a tattoo magazine or three), and another 6 hours last week linking together the bits of code I have. The right leg will wait until another existential angst quota is met, but in the meantime, I think I’m done. Really.

This, in addition to the “comfortable in my own body again” thing means I’m wearing skirts and shorts, which was otherwise pretty unheard of.

Oh yeah, I was a Professor of Practice at Brown University for a semester. That was pretty cool.

Showed up in New Scientist

People have made some pretty strange sounds when they see my calendar. I doubt anyone is confused when I refer to my tendencies in this arena as “compulsive.” But I used to make choices about what I spent time on based on if I was already busy or not, regardless of it was something I wanted to do (or not). Removing the word “busy” has meant I decide how to spend my time based on priority and how I’m feeling. It also changes how people interact with me (using the term “busy” set me up as “important,” which is some bollocks). While I still sometimes lapse, I’ve also worked hard to remove the word “sorry” as a reaction to things. I want this word to carry meaning, and how I use it changes how I take up space and how others respond to me. I am not “sorry” now when I forget something small, or when I’m slightly in the way. I am sorry when I really fucked something up, or if you’ve had a terrifically difficult time of something.

I averaged 16mph over the year, hitting a peak of 38mph for December. This doesn’t include trips back and forth from Providence and Cambridge, nor London and Brighton, etc. I hit a new continent (Australia! By early 2016, I’ll only be lacking Antartica in Continent Bingo, and who counts that?). I’m hoping to get this number down in future (2015 WAS lower than 2014 by about 10k miles, but higher than other previous tracked years), but I’ve been experimenting with traveling with people, so maybe the mileage will stay up but I’ll be happier about it. 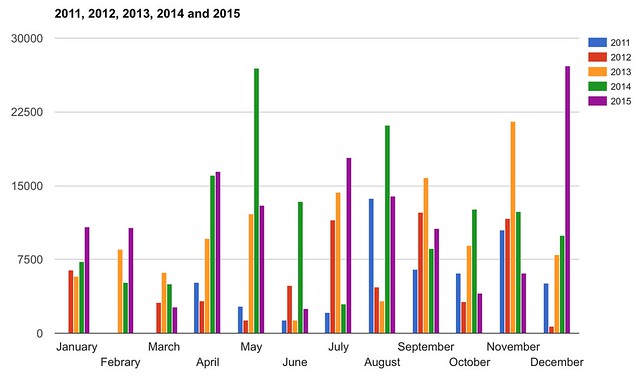