Originally posted on the Truss blog

Hackathons are a way for a community to rally around a cause, to learn from each other, and to push collective work forward. Here’s some research on it. Hackathons are also about publicity and headhunting. Think about the last few hackathons you read about. The piece was probably about the winners. Hackathons are, in general, further the “one great man” narrative.

But feminist hackathons now exist. We wrote a paper on the 2014 Make the Breastpump Not Suck! Hackathon which was about exactly that. But one thing we didn’t get quite right in 2014 was awards.

So for the 2018 Make the Breastpump Not Suck Hackathon, we took a different approach. We made our objectives explicit and described how we would reach towards them by devising a strategy, putting that into a process, and then implementing. This post is about that journey.

Awards are often used to reward the most “innovative” ideas. Prizes are often given out of the marketing budgets of businesses, based on the anticipated attention gained. In contrast, when I have given prizes at open access and disaster response events, I have focused on rewarding the things one’s brain doesn’t already give dopamine for – documentation, building on pre-existing work, tying up loose ends. Our goals for the MtBPNS award process were few, and at first glance could seem at odds with one another. We want to:

There’s also an implicit “f*ck it, ship it” mentality associated with hackathons. The goal is to get a bare-bones prototype which can be presented at the end. But combatting *supremacy culture and ceding power require that we slow down. So how do we do that during a weekend-long sprint?

What’s the road from our current reality to these objectives, with this constraint?

Encouraging more options and supporting continuation assumes support through mentorship, attention, and pathways to funding. Each of these could be given as prizes. Celebrating difference assumes not putting those prizes as a hierarchy.

First and foremost, we decided upon not having a hierarchy to our prizes. We put a cap on the maximum value of awards offered, such that the prizes are more equal. And, unlike last time, we removed cash from the equation. While cash (especially for operating expenses) is a vital part of a project moving forward, it complicates things more than we were set up to handle, especially in immediately setting up a hierarchy of amount given.

Half of our judges focused on strategic movement towards our objectives, and the other half on pairing with specific prizes. The strategic judges worked with our own Willow as judging facilitator and the MtBNS team to devise a set of priming questions and scales along which to assess a project’s likelihood of furthering our collective goals. You can see where we ended up for overall criteria here.

Awards offered, and who offered them

The other half of the judges were associated with awards. Each award had additional, specific criteria, which are listed on the prizes page here. These judges advocated their pairing with teams where mutual benefit existed.

The process we thought we would do

We hosted a science fair rather than a series of presentations.

Award ceremony MC’d by Catherine. Each award announced by a strategy judge, and offered by the judge associated with the award.

The teams immediately flooded throughout the space, some of them merged, others dissipated. We couldn’t find everyone, and there’s no way judges could, either.

There’s no way a single judge could talk to the 40ish teams in the time we had between teams being solid enough to visit and a bit before closing circle. Also, each team being interrupted by 16 judges was untenable. The judges came to our check-in session 2 hours into this time period looking harried and like they hadn’t gotten their homework done on time. We laughed about how unworkable it was and devised a new process for moving forward.

Updates to the process

Asked teams to put a red marker on their table if they don’t want to be interrupted by judges, mentors, etc.

Leave the judging process during the science fair and deliberation the same.

And — it worked! We’ll announce the winners and reflections on the process later.

I wonder if, what Scott means, in this whole storm recently, is actually:

“Your struggle is my struggle. While I had a really rough time growing up, it must have been just as hard for people like me, and even harder for those facing structural oppression. I want to fight these systems with you. When you say I’m ‘privileged,’ I feel like my experience is being discounted and it makes it difficult for me to be in solidarity with you.”

I feel like this is what Laurie is asking for. I know it’s what I would ask for.

I went to AkiraChix: Women in Technology Conference in Nairobi, Kenya this past Saturday. It was pretty outstanding. A couple hundred people in attendance, including a few men, and an incredible variety of relationships to tech (women who run the business side of tech orgs, sysadmins, bloggers, PHP devs, those in technical classes, etc). 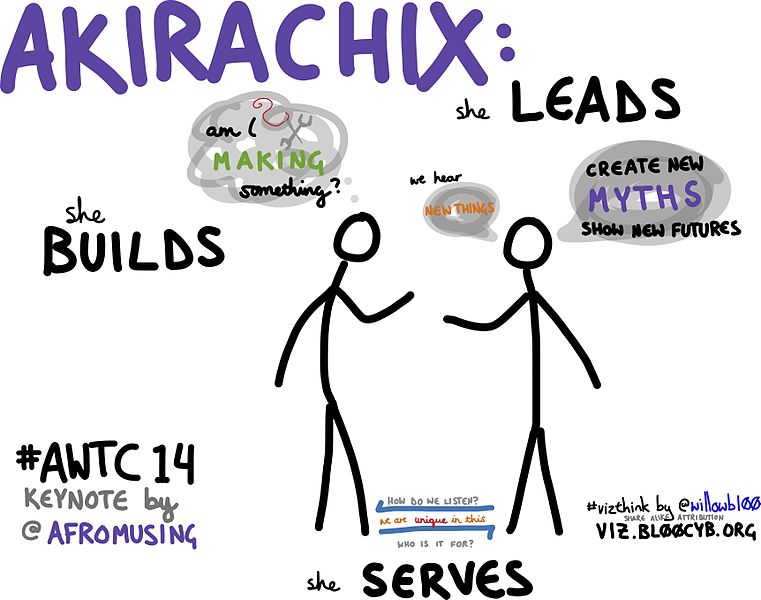