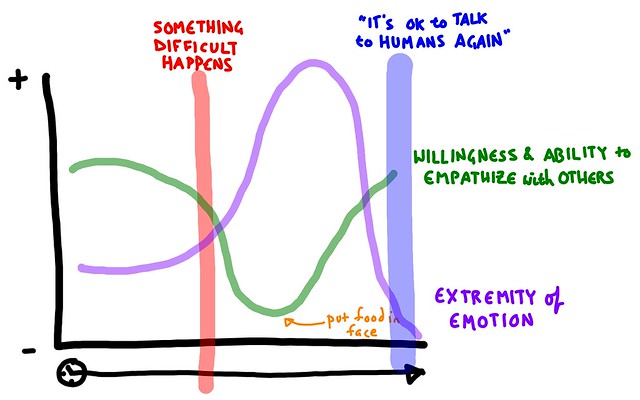 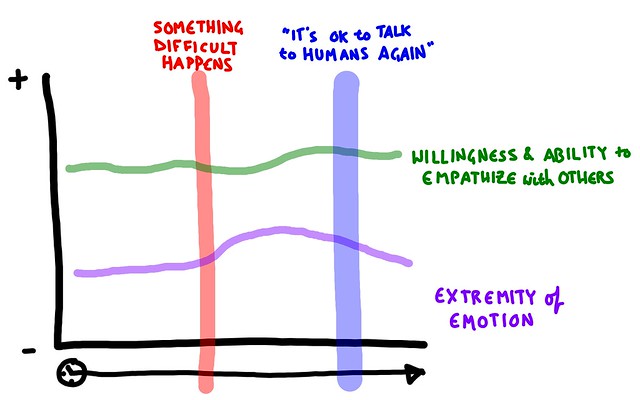 This has been great. But there are also some second-order effects of this shift worth talking about. END_OF_DOCUMENT_TOKEN_TO_BE_REPLACED

Most of my work focuses these days on social justice in networks. Distributed response is this – how do we perform mutual aid in times of extreme events? Weaponized Social is sort of this (hey, did you know we’re doing one in Nairobi? Also in San Francisco?), of the role of an individual and a group in a networked culture. Networked Mortality is about how we deal with death in a networked age, how a distributed group copes with the loss of one of its members. I gave a talk at Arse Elektronika years ago about PostGeographic Sexuality — what it was like to be partnered with people when encounters are instance-based, rather than cycle-based.

The whole thing a little bit ago with the manic episode pointed at something else glaring in my life which needs to be explicitly coped with in a new way: pattern detection. While I could just take medication to create hard-borders around my affect, I’d rather at least attempt meditation practices to cope. But the interim is potentially dangerous – what if my unpracticed mind isn’t able to do it, or (worse yet) fails to catch that it’s not working? A person with a more standard life might ask a neighbor or partner to look out for them, but that’s not much of an option for me. How am I, who at my most stationary still spends half of each week for 3 weeks a month Providence and the other half in Camberville, and one week a month in the Bay Area; supposed to benefit from people who care for me noticing my unhealthy patterns? How is anyone supposed to notice a pattern with me?

So I’ve started to do this intentionally, similarly to all of the other exercises. A small group of people, who do see me more often (and regularly) than most, have been put in touch with each other with the explicit purpose to check with each other if I seem to be going off the rails in any way. I’ve caved and purchased a fitbit (an evil step sibling to the Pebble of which I’m quite fond), so the Warning Signs (excess coffee, extended sleep deprivation, etc) can be noticed by other people. A tiny web of friendly surveillance. I don’t yet know how it will go, but I do find it highly amusing that Distributed Life is present even here.

I’ve detailed out my process, in case anyone is interested in replicating it.
END_OF_DOCUMENT_TOKEN_TO_BE_REPLACED

We get a thousand tiny checks a day that keep us from being jerks to each other. Someone grimacing at the joke you’re about to make, blog entries from Captain Awkward, twinkles and blocks at a meeting. Some of these are empathetic – knowing how you feel when someone looks at their phone when you are talking might deter you from doing the same to someone else. Some are explicit – mailing list rules you agree to when signing up. Generally, there’s little chance of you doing something super awful if you’re surrounded by good people, and invested in learning about the world and your role in it. This is part of how we society. This is part of why and how we social movement.

When those checks aren’t working

Given my incredibly limited understanding of the autism spectrum, it seems that some of these feedback loops simply aren’t able to be processed by some folk. But there is a thing which I do know about where the ability to care about the check-back, adjusting part of the feedback loop breaks down. Let me take you into the brain of a manic person. IE, me.

Being hypo-manic (slightly manic most of the time) is like having a super power. I have a ridiculous amount of energy and drive. I will joyfully get things done that many might find insurmountably daunting. My response to chaotic no-win scenarios is to role my sleeves up and get going. I tend to think, that in one week: giving a talk, teaching a class, moderating a multi-hour discussion, spending time with people I love, and still pulling 40 hours of standard work of all sorts of rad projects and foundation-building is maybe not actually as productive as I would have liked to have been.

The stiletto of this persistent silver lining is that it also means, occasionally, feedback loops quit being as such during severe manic episodes. Social understandings I’ve agreed to, upheld, even helped create just… quit mattering. Explicit agreements are left to the wayside in enthusiasm to enact SOMETHING WHICH IS GOING TO BE TOTALLY AMAZING. Everything is going to be fine! The people I have those agreements with will understand this change in plan! Have some faith in me, while I trample your ability to be a consenting adult in this situation! In short, my brain’s connection between action and consequence (not just to me, but to anyone involved) is broken.

the only thing that matters during a manic episode is that thing you’ve decided you want to do.

I’ve experienced a grand total of 2 episodes severe enough to merit people calling me out in ways I couldn’t ignore in that state, and the subsequent depressive crash while I figure out what to do about still being a person of integrity even when I am not myself is pretty fucking mind-melting as well. Which is where I am right now.

After the episode collapses, the fallout is the most sickening experience in the world. People and projects I love have been exposed to injury by the same mechanism which I advocate for the hardest otherwise — our ability and desire to build greater things together than we could on our own.

To see an episode after it has passed is to be alienated from one’s self. To lack any connection, empathy, or understanding for who I was in a moment (or moments); in the same way my other-self had lacked any connection, empathy, or understanding for those I cared about in those moments. Of course I know better. I not only try to demonstrate how people can Suck Less, I try to provide scaffolding for such as well. How could I have done this thing that I help others know not to do?

Despite that disconnect, I’ve still found it vital to be accountable to my actions. “It wasn’t me” isn’t an excuse I wish to explore. It was me, some strange, terrifying part of myself that I don’t understand and that I’d rather didn’t show up at all. I can only hope that owning up to these glitches in my brain-system can rebuild the trust I destroy in those moments. I feel like I’m picking up the pieces after a destructive family member I can’t help but love has wrecked havoc across a project I love. “That was not ok,” other people say. “I know,” I respond. Because I do.

This is a process

Selfishly, I want us to figure out how to deal with people like me. People committed to causes, with (hopefully meaningful) things to offer on a pretty solid ongoing basis. But people who also cannot be 100% trusted all of the time.

Yes, I see someone about this. Yes, I sometimes take things to help regulate it. But I’m more interested in society’s take, as always. We’re starting to have dialogues about depression – how to signal it, how to take care of ourselves and others, etc… and we need to keep figuring those things out. I’d like this to get figured out, too.

None of us is perfect. None of us should be. Dealing with our flaws in healthy ways is yet one more way we build futures better than our selves.