I’ve now lived in SF for some months. My room is built out, painted. Still last-20% things left to do, like a door frame and a functional curtain rod, but the two things of Home are handled: books and art. The books for awhile were shelved 3 deep in a setup meant to stagger two. But now there is an extra bookshelf, so that’s remedied. “You may have too many books,” the red mohawk said. The phrase didn’t even land, the impossibility of it. The art has been fit around the shelves. Still a few new pieces to frame (a constant balance between Past Willow “more art! support artists! shiny things!” and Future Willow “now this must be framed and put somewhere.”). The tetris of nesting.

And the coffee here. It is so good that I make nearby people uncomfortable with the sounds of happiness I make during those first sips.
I miss Cambridge, fiercely. But it is so good to be here. 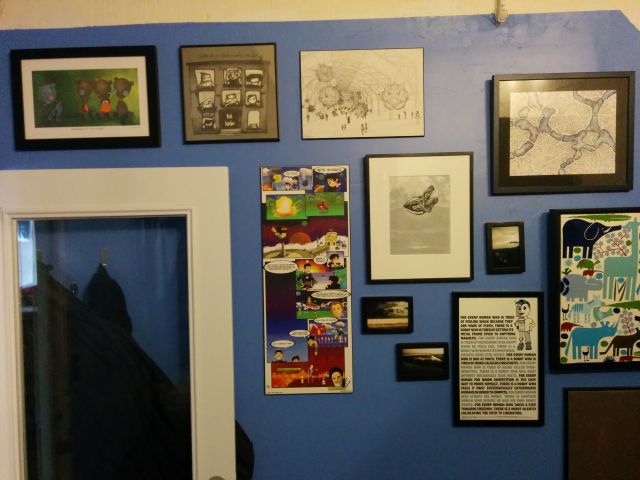 I’ve been thinking a lot lately about infrastructure. I blame having George Voss in town awhile ago, another social-scientist-flavored person enamored with infrastructure. The beauty of it, the visibility and iteration and possibility of it. The lived-in infrastructure of Western Europe. The gregariousness of US infrastructure. The iterated-until-smooth infrastructure of Japan. How each feels when you stand near it, when you benefit from it, when it breaks.
And I’ve been thinking a lot lately about what it is to be infrastructural, as a person. About dependability, predictability, autonomy, appreciation, and visibility. While I feel like I’ve done a decent job of having integrity in life, in being dependable in the sense of “I have said I will do something, so I will now do it,” I haven’t had a routine associated with being legible to others for a loooong time. Some people have dinner parties every Friday night, or see each other regularly at a shared coffee shop. I know how to pack for 3 weeks of traveling with no laundry days and only with carry-on. Both are a form of routine or ritual, but one has to do with being social infrastructure and the other has to do with being able to adapt to social infrastructure (or lack thereof). I am very worn out from the latter, but also completely out of my depth in the former. I find it fascinating and slightly glamorous in a way others must view the jet-setting lifestyle.

Like, I’ve been so proud of the hook I put in my room for a purpose. It is for my bathrobe. If I put my bathrobe there, it will still be there, later. I view this with the same glee and tentative disbelief that I can only assume other people view upcoming trips to far away places.

And so I’ve been wondering what it is to be like that as a person. Predictable. Someone people can depend on for a known set of things (and hopefully more, and serendipitous, things). And how to do that while being humble while not becoming invisible. Maybe I already do it, but don’t know how to see it?

I’m wondering how to Friend. I miss Jess so much right now because we could just yell “HOW DO I FROND YOU” and that was (and is) our friendship. That’s how we are friends. The ability to do that. I don’t know how to do that with other people, the building the small bits of life, the everyday interactions which can also make up a shared history. Not the intense “please pick 3 of the following 4 options to hang out during the 10 days I’m in your city” but “hey do you have lunch plans this week?” The predictability of the same folk being around, and of being around as well. I guess I just keep showing up? This is as complicated as getting groceries for a week and having them still be there (and not moldy) when I come back from somewhere. Which is to say very complicated.

I’m grateful for the housemates, friends, and sweeties here for being so gracious during this time of Figuring Things Out. For providing a set of protocols I can plug into and talk about with them and edit. Delightfully learning the social code, appreciating the iterations which have come before which have made this so much easier for me. Now helping to iterate, and to build the trust that will welcome more people into future iterations. There’s something in here about self-maintaining infrastructure through its inhabitation, but I haven’t figure it out yet.

So, how do you do it, friends? How do you Friend? How do you think about your infrastructure and your role in it?