We camped out for a few lovely days at the inspiring Little Devices out of N51 at MIT. Hugs and hearts to Anna and Jose who brought their brains and their space to our hackdays. And didn’t find our requests for things like buckets, tubing, and CNC strange. We were constantly surrounded by go carts and craziness. So happy.

Mark used the OSM-Bright style and started to add Tanzanian Open Data to create a basemap for Taarifa (and generally anyone interested in Tanzania). Have started to refocus the cartography on public services as opposed to navigation – roads are the design focus of OSM Bright – Mark is changing this!

Requests have been made to import this data into OSM, however, as yet have been unsuccessful – I am following up on this! So, seeing as I can replicate OSM’s stack insofar providing a map tile service is concerned, I’ve started to create a Tanzanian base map.
Before:

Currently continuing to work on it. Will need to understand how the loading of OSM Stylesheets into TileMill can be re-consumed by others, currently the work is installed on a local TileMill and isn’t packagable for wider consumption. Changing this is a priority.

On Mark’s computer – needs to be on a github repo. As a (rather large) side note. The finished product will need to be hosted on a server with at least 100gb of space, if not more. Consequently understanding where and who has this infrastructure will be important.

Drew did a bunch of work on this. Here’s a drawing from brainstorming: 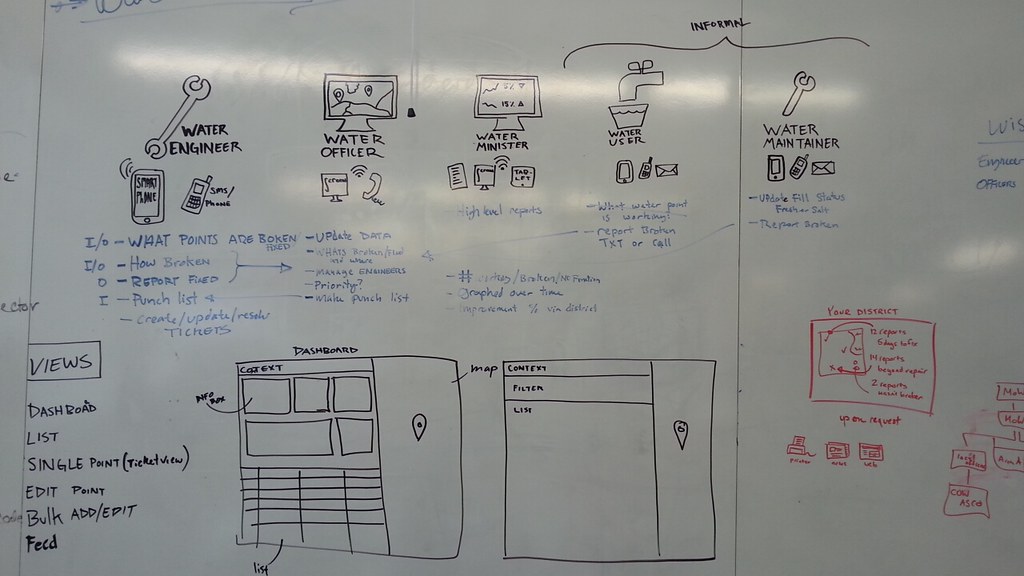 And a link to the PDFs.

There are some lingering questions that not enough experience was garnered in order to answer. Things like – if we want to show people that their reports are being acted on, but we can’t send them text messages back (if we’re protecting their identities), then having printouts at local municipal offices makes sense. What should those look like?

Dirk and Florian led the charge on this.

There was also some killer work done on water sensors with Public Labs, and on telephony plugins with Tropo. Look for that followup here!

Next, we’re taking this show on the road to University College London 5/24 and 25 (bit.ly/taarifalondon), and then to Dar es Salaam (bit.ly/taarifadar). We hope you’ll join us, in person or remotely, for one or both.

See the list of our tasks on this hackpad page.