This was originally posted on MAKE, but I liked it so much I wanted to be sure it showed up here, too.

Vienna is old. They even, as my host Fin said, “dug up this area to show that we’ve been around since the Romans. We’ve been around for a long time.” The statues are gorgeous, the streets are clean and well-lit, and the buildings are HUGE. I mean massive, like, excessively so. There’s a thriving art scene, too, something called Museum Quarter and a plethora of government grants for really weird things. It’s hard work, though. Artists here must document, be accountable, and meet deadlines.

With such a thriving and supported creative scene, why did Metalab (oh, you want English?They care.) emerge, and why has it done so well? Metalab moved into their first (and current) space back in 2006, after a year of planning, becoming one of the first truly extroverted spaces in Europe.

Whoa whoa whoa – extroverted? How can a space be extroverted (or, introverted, for that matter)? Well, let me tell you about some things. There are clearly some activities that require a high barrier of entry in order to participate. Lasers. High voltage. Hacking the Gibson. And you want people around you can trust to not kill you, or in more traditional hacking, to not reveal your identity. And that means a pretty deep level of knowledge and trust. So, for a long time, and still in some places, you 1) have to know what you’re doing 2) know and care that there is a group of people out there doing similar things and 3) have access to those people. It’s a necessary system in some cases. But it does tend to leave out the n00bs. And thus, spaces like Metalab, extroverted spaces, are born.

Metalab has a board (as mandated by their structure under government regulations), a core mailing list which addresses actionable infrastructure questions, about 180 members, and an uncountable number of active non-members. They welcome anyone in so long as someone with a key is present. And I do mean anyone, including this blue-haired nomad. People don’t have to pay dues to participate, to host an area, or to attend a class. You just… show up. The (functional) assumption is that if you see value and have extra monies, you’ll support the space. And it works.

Some people do have issues with the self-organized structure, however. They ask who they should talk to before moving ahead with an idea, if they can move a table, if they can start a project. Michael, one of their board members, seems to enjoy the fact that some members don’t know he’s on the board, to the members he needs to guide towards the do-acracy model of the space. That model of activity has produced such projects as the Graffiti Research Lab, with their famous L.A.S.E.R. Tag.

GRL is no longer what he’s most proud of, though. That would be the recent conversations around things like geek depression (that’s him with the crazy hair. No, the other crazy hair. Not Mitch), queer hackers, and politics. He says “it’s like the hacker movement is finally growing up – realizing that we’re people, preparing to care for each other through coming issues. We’re turning these spaces and communities into more positive environments.” He’s also excited about the constant international exchange happening at spaces, specifically Metalab. The core crew of hackerspaces.org are either current, past, or honorary members of Metalab.

This is one of my favorite examples of a space that blurs the line between “hacker” and “maker.” It’s rather obviously about more traditional hacking models, but also takes an active role in the creation and re-appropriation of tangible objects. They are political but accessible. The phone booth is their logo. It stands for many things. Public infrastructure (what hackerspaces should be). Changing into a superhero (or your true self, Kal-El/Superman/Clark Kent arguments aside). Matrix reference (connections between a perceived and an actual world with battles to be fought). Phreaking (one of the original forms of hacking). Metalab took theirs to Camp in ’07 and hooked up to DECT network, and again in ’11 as well as HAR.

Check them out the next time you find yourself in Vienna.

There is clearly a vacuum that MAKE is filling via DARPA funding – our schools are crap. Military and religion have no place in education for youth outside of history classes.

I fully support people who wish to take a public (or private) stance against these associations.

My conscious, after much introspection and conversations with amazing people, dictates that I remain involved as a connector, to hopefully create an introduction to the ideals of mutual aid, transparency, adaptability, and emergence to these less-political communities. I want to increase the number of people who care about things like this, and to me that means being involved in the process.

I request that we continue this dialog until it is not necessary – I never want any morally questionable thing to go unnoticed.

Jigsaw Renaissance is a learning and making community based out of Seattle, WA. It was founded in 2009 out of a Transhumanist Discussion Group. 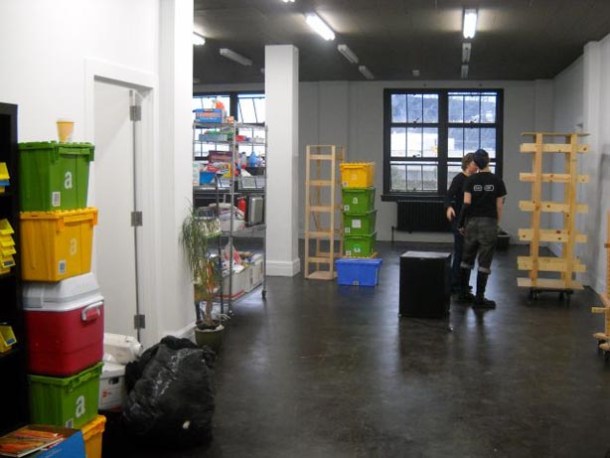 Tiny Victory! Jigsaw 3.1 is complete. Its third location in 2.5 years of existence, each one better than the last. Jigsaw started out in the upper floor of a Quonset Hut Burner workshop in a super-shady part of Seattle beneath an in-process off-ramp. The next move was into a storefront on First Hill – high foot traffic and higher rents. On one side was a convenience shop with .99 beer, on the other was a money-advancement place.

Jigsaw’s new home is Inscape, the rennovated Immigrant Detention Center of Seattle, now full of artist lofts and robots. Jigsaw was in a temporary space for several months while they removed the questionable chemicals and did a custom build-out for the permanent home. And here it is – all sealed concrete floors and freshly painted walls. There is a huge classroom, a seperate space for the loud and dirty activities, and a shared workspace. There are still some improvements to make, but it’s ours and it’s home. You can come check it out February 11th for our house warming if you find yourself in Sunny Seattle.

Moving your Hacker/Maker Space is a Big Undertaking

Here are some things you should think about:

Do you need to move?
We sometimes think changing location will solve some issues which are actually cultural. Too much clutter? While the fresh start of changing location is a nice time to purge, why not just throw a party to do the same thing? Way less hassle. Good reasons to move are finding a better location, with more reasonable cost. It takes a fair amount of money to move – you have a gap between regaining your deposits and placing ones on new rent. The paperwork involved with swapping locations on electric, internet, insurance, and the like, is also a fair amount of overhead. Do you reallywant/need to move?

Choosing where to move

What have your experiences been? Add them in the comments!

Thanks to Michael Park, Jigsaw blogger extraordinaire, for the lovely images.